“As a deadly virus decimates the world’s population, survivors struggle to find each other. After all, nobody wants to be Alone at the End of the World.

Thirteen-year-old Ethan should be practicing his skateboard moves, not watching his family members die, one by one. He knows he could become a victim of the evil infection at any minute. Scared and alone, he fills his backpack and goes in search of other survivors, hoping he lives long enough to find someone. Anyone.

When Cassie sees the bodies of neighbors and strangers littering what had been pristine front lawns, she realizes her intense focus on business and family may have saved their lives. How does a single mom and her two kids survive an apocalypse alone?

Noah emerges from his two-week fishing trip in the Northwoods of Wisconsin, shocked to learn that a devastating pandemic has swept the world. Should he venture into the fray to find other survivors or retreat into the woods and isolate himself as long as he can?

When their paths converge, they face a new struggle ─ learning to trust total strangers as if their very survival depends on it… because it does. Sympatico Syndrome is intent on sparing no one.” 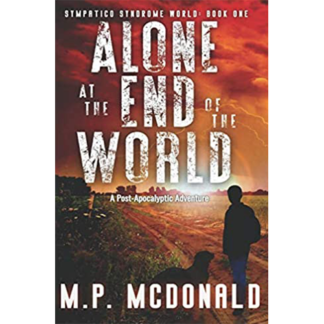 You're viewing: Alone at the End of the World (Sympatico Syndrome World Book 1)
Buy on Amazon