Los Angeles, 1986. Jenny Stone, a blossoming art student, is lured into the L.A. underground by a blue-haired, goth street artist with a purse full of drugs and a not-so-lucky rabbit’s foot. Lost, she lands at the feet of a charismatic rock star, Evan Reed. Not a Sunset glam rocker, Evan is the lead singer of rock ‘n’ roll’s loudest, angriest band, embodying the dark side of the “The Strip.” Handsome, charming, and enthralled with the young artist, he wants her paintings—then he wants her.
A dangerous cocktail of narcissistic love bombing and manipulation keeps her in his orbit. His demons and need for control threaten every aspect of their lives together. There were warnings, one red flag after another. Yet, Jenny is pulled into money, fame, and excess. Will she survive or succumb to the violence that surrounds her? Atomic Love is Sharp Objects meets heavy metal memoir and will appeal to fans of Gone Girl and Caroline Kepnes’s You.” 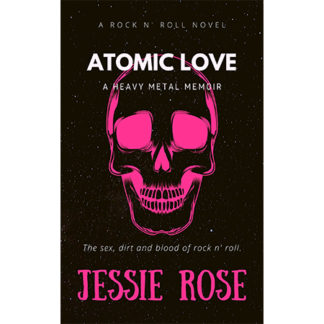