“The saga of Captain Napalm begins!
What happens when an unstoppable force meets an immovable object? Who cares! You’d rather know what happens when a bow-and-arrow-wielding immortal who wishes he was a teenage superhero comes fist-to-face with Greek gods and an army of mythological monsters. Wouldn’t you? Of course you would. And you’re in luck, because Captain Napalm vs. the Grungious Gundabad is that story.
It all starts when Gundabad comes to town…
Gundabad, giant troll-monster man-thing that he is, invades Metropola City with his army of fish-men and snake-women and vicious harpies and flying monkeys. They set up shop in a downtown hotel and set to their work of eating human heads. What can the good people do? To whom can they turn? Luckily, on the other side of the world, Captain Napalm and his roc-phoenix sidekick, Samael, are just clearing up a minor misunderstanding with Helios, Greek god of the sun. Concluding their negotiations with only minor fatal wounds, they soon arrive in Metropola City to save the day!
But are the heroes in time to save the day? Does the day even deserve to be saved?
Armed with a magic bow, a smart mouth, and a complete lack of knowledge of his own powers, Captain Napalm bravely puts his bird-friend’s life in danger again and again in defense of people he doesn’t really care about. The evil man-eating monsters cannot win! Good must prevail, despite all odds! For the good Captain and trusty Sam fight for truth, justice, and a hefty paycheck! (If the mayor pays up…) Who will win? Who will lose? Who will get blown to smithereens? Pick up Captain Napalm, Volume 1: Gundabad to find out! It’s a children’s adventure book for kids of all ages. A young adult fantasy for adults who fantasize about being young. It’s the start of a fantastic new superhero series that you do not want to miss!” 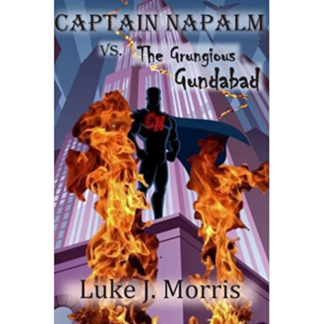 You're viewing: Captain Napalm Vs. The Grungious Gundabad
Buy on Amazon