“From space they came, to space they returned, humanity searching for a way home. The people of the Cygnus system were determined to find other life, maybe even return to Earth as they explored the known galaxy. Humanity would not be denied.

And they had the company of the intelligent species humans created centuries past, who evolved and became equals, partners in the journey to a better place. They were all the people of Cygnus VII.
From the ashes of their past, Cygnus was rising.

The motto of the Space Exploration Service was “the ship is life, save the ship.” And the crew had done that, repeatedly, even though it cost lives. Everyone on board the Cygnus-12 volunteered for the Space Exploration Service because they believed that the risk was worth it. For all humanity, they went to space, to find what was out there, return with knowledge to improve their civilization. And if they could return with word that Earth was there, alive and well, then that would make every death that much more meaningful.

Cygnus Rising is the first book in a Space Opera series based within the Free Trader universe.” 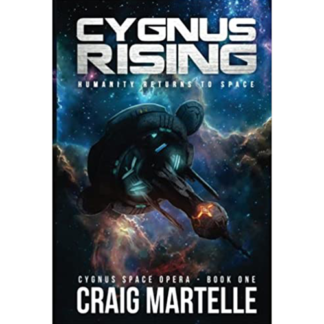