A surprise homecoming. A looming shadow. A witch in desperate need of a vacation.
Psychic Nora Ashcroft is ready to start fresh… again. Three months after a portal opened up and swallowed her future, it’s time to move on. But her long-awaited romance with a certain bartender may have to take a backseat once more after the body of a murdered witch disappears from the crime scene.

When clues point to necromancy, Nora finds herself at the top of the suspect list. And as she juggles a witch’s unexpected return to Eastwind, a dangerous stalker, and an unidentified hellhound on the loose, this Fifth Wind might have to tap into some unpleasant powers if she wants to avoid a life behind bars.

Will Nora solve the case of the missing corpse before her budding romance withers?

Dead Witch Walking is the tenth book of the delightful Eastwind Witches Cozy Mysteries that are best enjoyed in order. If you like plucky female sleuths, paranormal plots, and satisfying laughs, then you’ll love Nova Nelson’s witchy whodunit. 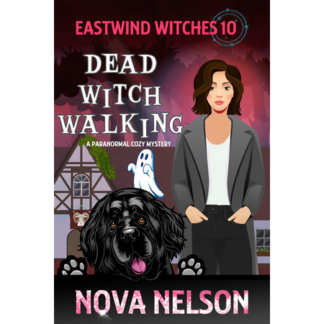