“A Cat and his human minions fight to bring peace to humanity. For readers from 13 to 65, find compelling characters engaged in an adventure of search, conflict, and discovery.

An island where experiments on people yield horrific results.

An undersea city populated by humans dragged from the beach by unrelenting Bots.

The Western Ocean, an untapped source of food and power. The freedom of the open seas.

When the AI finds an open ocean exploration laboratory, the Free Trader and his companions head to sea in search of the abducted residents of White Beach.

The ocean welcomes them into its embrace as nature tries to reclaim its own, but that’s not the worst challenge that the companions face. What creatures lurk beyond the ocean’s waves, patiently waiting for new blood?

“Immensely Enjoyable! Fantastic story set in the far future on a distant previously colonised planet that has forgotten its past because of one of humanities favourite past-times, war. Being a big fan of sci-fi and post apocalyptic adventures this author has captured everything I love about these two genres and melded them in a wondrous land full of genetically engineered creatures and old technology forgotten by the majority of the humans on the planet. I’d recommend this book to anyone who likes a good sci-fi adventure.” Evan, Amazon Five-Star review” 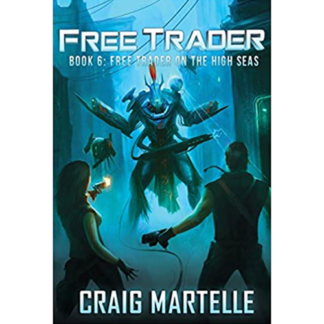