Start the first book in the blockbuster Alien Invasion series; the breakout sci-fi series with over 1000 5-star reviews, from the bestselling authors of Yesterday’s Gone and Fat Vampire.

THEY ARE COMING. THE COUNTDOWN HAS BEGUN…

The discovery of objects approaching from Jupiter orbit sets humanity on edge, sending cities into panic. Most is unknown, but thanks to the popular Astral space app, everyone knows the few facts the government has tried to hide:

The objects are enormous spheres numbering in the dozens, maybe hundreds. They are on an approach vector toward Earth … and they will arrive in six days.

Entrepreneur Meyer Dempsey is in New York, realizing the time has come to act on all the preparations he’s made without ever consciously knowing why. For years Meyer has been preoccupied by a dreamlike sense of coming peril and knows where he must take his family … if, that is, they can make it before society eats itself alive with fear.

The end is only beginning … 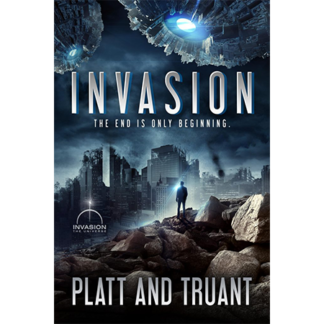 You're viewing: Invasion
Buy on Amazon