“A world within a universe. Stories from the Starship Warden.
Life struggles to survive and some even thrives. Once servants and now their own masters, robots and androids must share the ship’s space. And some of them don’t want to.
Fourteen compelling tales.
Led by the first science fiction RPG’s creator, James M. Ward, we explore the many levels of the Starship Warden, watching the remnants of humanity and its creations battle the robots threatening to eliminate all non-mechanical life. Who will survive to write the ship’s history?
A vast starship, a virtual world in itself, carrying colonists, livestock, and the flora and fauna of Terra is struck by a cloud of unknown radiation while en route to a distant star. Chaos reigns when the radiation kills most of the crew, and in the ensuing madness, the knowledge of what the ship is and  its destination is lost to the survivors – and there are many survivors. Intelligent mutated animals and plants now populate the vessel, and these compete or perhaps cooperate with the humans aboard.
In METAMORPHOSIS ALPHA, you are aboard the stricken starship and struggling to survive, trying to gain knowledge of the strange devices and mechanical apparatus of the vessel, attempting to learn the secrets of the strange “world” you inhabit…
Join us today on a grand adventure aboard the Starship Warden.” 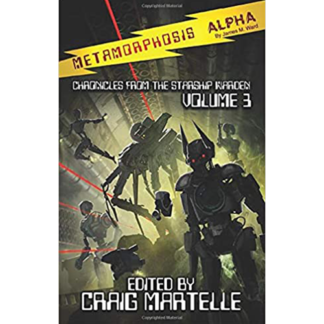 You're viewing: Metamorphosis Alpha 3: A Generation Ship Catastrophe Survived (Chronicles from the Warden)
Buy on Amazon