Metamorphosis Alpha: Stories from the RPG (Chronicles from the Warden Book 1)

“A vast starship, a virtual world in itself, carrying colonists, livestock, and the flora and fauna of Terra is struck by a cloud of unknown radiation while en route to a distant star. Chaos reigns when the radiation kills most of the crew, and in the ensuing madness, the knowledge of what the ship is and where its destination lies is lost to the survivors – and there are many survivors. Intelligent mutated animals and plants now populate the vessel, and these compete or perhaps cooperate with the humans aboard.

In METAMORPHOSIS ALPHA, you are aboard the stricken starship and struggling to survive, trying to gain knowledge of the strange devices and mechanical apparatus of the vessel, attempting to learn the secrets of the strange “world” you inhabit…

Eight authors come together to help bring the world of METAMORPHOSIS ALPHA alive. Led by James M. Ward, the game’s original creator, enter the starship Warden, and through the eyes of the authors, enjoy the adventures of the bold as they struggle to complete their quests to understand what their “world” is all about.

Metamorphosis Alpha is the world’s FIRST science fiction roleplaying game. It was designed by James M. Ward, who also wrote numerous Dungeons and Dragons supplements and modules. MA1 – Chronicles from the Warden is a collection of stories from the game, by gamers, and for gamers.” 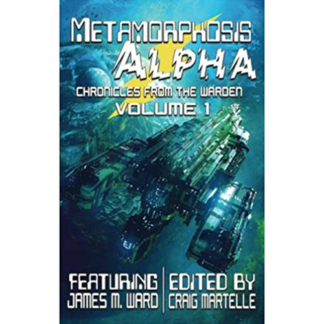 You're viewing: Metamorphosis Alpha: Stories from the RPG (Chronicles from the Warden Book 1)
Buy on Amazon