“For two thousand years you’ve been eating His flesh and drinking His blood…Now it’s His turn ! In Prince of Pieces, the Son of God is back and He’s mad as hell. After two millennia of being exploited by purveyors of greed, violence and hypocrisy, Jesus returns with a vengeance. No longer turning the other cheek, He disposes of sinners and religious hypocrites with biblically inspired justice. Only one thing is certain in the shattered world the rampaging Christ leaves in His wake – – it will take more than nails to stop Him this time!
“Sure to offend all the right people.” – Jello Biafra –
“…a masterpiece of story and art combined. Prince of Pieces is a MUST READ for fans of satire and horror alike. Rarely does a comic draw you in and keep you there for the entire 75 pages. But there are no weak spots here. You NEED to have this graphic novel in your collection…” – Horror Cabin –
“The comedy is gold. The brutal truth of it all is impacting. And when you incorporate Colin Blanton’s artwork into the equation, it really does feel masterful…Miserendino, Blanton and Creator’s Edge Press have a grand slam on their hands.” – Graphic Novel Reviews –
“This fast-paced, clever volume is packed with visual and textual humor, adroit gore and surprisingly relevant insights about religion.” – Artvoice –
“…a liberal dose of awesomesauce…” – Weng’s Chop Magazine –
“…a thrill ride…a great spin on a zombie romp.” – Fanboy Comics –
“It would make for a fantastic horror film and probably would fit right in with Tales From The Crypt.” – Indie Comix -“ 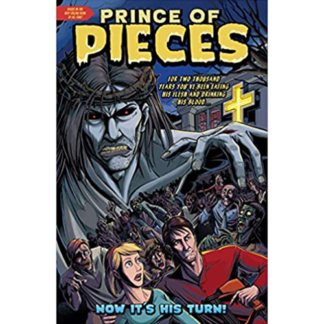 You're viewing: Prince of Pieces
Buy on Amazon