“HOW DO YOU KEEP AN INNOCENT CHILD SAFE FROM A PREDATOR WHEN YOU HAVE NO CONTROL OVER THE BEAST THAT ASSUMES CONTROL OF YOU?

A train bound for Vermont leaves Manhattan at 11:35 AM. It takes approximately 9 hours to arrive. Sunset at the arrival destination occurs at 8:20 PM. How does Michael Andrews, a man on that train who is afflicted with a werewolf curse, resolve the fact that the math just doesn’t work out in his favor? Or in favor of the young girl who is trapped, and cornered?

Michael’s unequivocal desire to help usually thrusts him into the middle of tight spots. And though he has never been good at math, he is consistently good at compounding the peril in his day. On an urgent and last minute trip to help a dear friend in need, he finds someone else to help along the way.

Can Michael figure out how he’ll be able to protect his young, innocent traveling companion as she tries to make her own cross-country escape from the predator who relentlessly stalks her? And does this curious child hold her own answers that can, in turn, help Michael?

In a tale that has been described as Logan meets Planes, Trains and Automobiles, Mark Leslie has crafted a thrill-ride that explores Michael Andrews, Alpha Wolf and Beta Human as he embarks on a life-altering road trip that sends him hurtling towards his own psyche as it brings him miles away from his familiar home territory.” 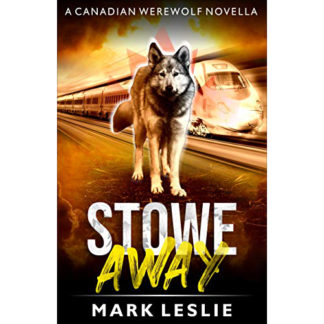 You're viewing: Stowe Away
Buy on Amazon