It is the year 2134 in a dystopian America, following a series of zombie plagues which infected and decimated much of the world’s population starting 100 years ago.

Those left, formed six walled Cities throughout the continent, all under the rule of a totalitarian government which enforces strict control over its populace.

Jonah Lovecraft, a former Watcher, was arrested for the murder of his wife. And like most criminals, he has one chance at freedom — to participate in The Darwin Games, a televised survival show which pits two players from each city against one another in The Barrens, the uninhabited areas outside the City Walls.

He’ll also have to face another enemy — the zombies which still roam The Barrens.

As he fights for his freedom against impossible odds, his daughter, Anastasia, stumbles into people who have information about her father — information which will change her life forever.

But it will also put her in the crosshairs of her father’s enemies.

Z 2134 is the first part of a new dystopian thriller from the bestselling authors of Yesterday’s Gone. Make sure to check out Z 2135, the next chapter of this harrowing tale, out now, and the final part of the trilogy, Z 2136, out in Spring 2014! 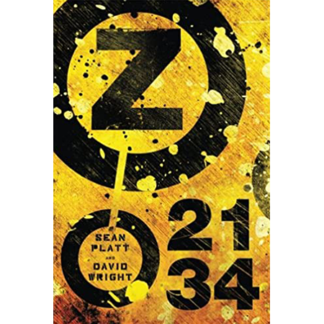